Food Thoughts
Mac & Cheese
Can't retrieve term. In case if you changed taxonomy slug for this term, please update widget settings to use new taxonomy slug.
This homemade Mac and Cheese Powder recipe is the best vegan mac and cheese I’ve ever made! I couldn’t believe how creamy, thick, and flavourful it came out, and how quick and easy it was to make! The powdered format is so convenient and nostalgic!
Share on pinterest
Share on facebook
Share on twitter
Share on email

I’ve always been a huge fan of boxed mac and cheese. I feel like it’s pretty much all I ate growing up, and honestly, I can’t help but judge people who don’t like it. I was – and still am – the pickiest eater ever. But one safe food for me has always been mac and cheese. Specifically the boxed variety, like Kraft Dinner (KD).

I ate Kraft Dinner pretty much every day after school… health goals, right? My favorite was the original, sharp cheddar, or white cheddar flavours – but it’s not like I wouldn’t eat any of them. Looking back on this, it was pretty gross that it was so normal to be regularly consuming such a murderous product. But the good news is, not all boxed mac and cheese is bad! It can actually be vegan and organic if you’re lucky!

I knew vegan boxed mac and cheese was a thing very early on in my existence. Even before I went vegan, my sister used to eat the Daiya boxed Deluxe Cheddar Style Cheezy Mac all the time. She refused to partake in the murder KD ritual with me, and for good reason! I tried Daiya back then and didn’t care for it. But after my first experience with it as a vegan, I was hooked!

Although the Daiya Deluxe Cheddar Style Cheezy Mac comes with a soft cheese pack, instead of a powder one, I really enjoy it! We ate Daiya mac and cheese religiously for the first few months after we went vegan! We were obsessed. If you follow us on Instagram you’ll know our profile picture has been a bowl of Daiya mac and cheese since the very beginning of our account. We just recently changed it to match our website. Here’s a throwback to that pic!

Either way, as much as I love Daiya, it’s just not the same as Kraft Dinner! The sauce texture doesn’t compare. Daiya cheese sauce is super thick and sticky. Kraft Dinner is thinner and not as pungent! Powdered mac and cheese is so much better than the thick saucy ones in my opinion! I know that’s probably trashy to admit, but I can’t help it, KD was my childhood! It has nostalgia working for it!

The closest vegan thing to Kraft Dinner that I’m aware of, is vegan Annie’s Vegan Cheddar Mac. Vegan Annie’s comes with noodles the exact same shape as Kraft Dinner – which is arguably the most important part – and of course, powdered cheese! The pictures I’ve seen of it on the internet look identical to original Kraft Dinner!

I was really upset when I found out it was basically impossible to get in Canada. Even Vegan Supply didn’t carry it! Not to mention that it was for sale on Amazon at one point for over $100 for a case of 12!

When we went to Toronto I was so sure we would find it! I mean, if anywhere in Canada was going to have vegan Annie’s, it would definitely be Toronto! But alas, we left Toronto somewhat empty handed. Although we did score some Road’s End Organics vegan Shells & Shreese! They were good but not even close to KD.

Just a few weeks after the Annie’s in Toronto depression 2k19, my sister came to the rescue! She found the original (AKA KD shape) Annie’s vegan cheddar mac at a discount store in Maine. It was on sale for $1 since it expired later that month. She got me 4 boxes. Why she only got 4 boxes when the most rare and sought after vegan mac and cheese was dirt cheap, is beyond me. I would have bought at least 40. Still super grateful.

She actually ended up gifting me three more boxes that she bought for herself but didn’t end up liking. I don’t know how anyone couldn’t like vegan Annie’s, but okay. Although vegan Annie’s mac and cheese is my favorite boxed mac and cheese, probably ever, it is a limited time experience. We currently have 3 boxes of it left, and I don’t see how we’ll be getting our hands on more anytime soon. See our review of Annie’s Vegan Cheddar Mac here.

That being said, I knew we needed a back up. Something to fall back on when we ran out of vegan Annie’s. Since it was national mac and cheese day, we decided to try out a new recipe. One that caught my eye immediately was the mac and cheese powder from It Doesn’t Taste Like Chicken! I mean, how can you NOT love Sam’s recipes?!

I was so impressed that her Homemade mac and cheese powder recipe was, well, powdered! I’ve seen non-vegan versions of powdered cheese at Costco in huge jars, and I was always jealous that we couldn’t get a vegan version! Like I have a hard time believing the bright orange cheese in the non-vegan ones is even real anyway! Why can’t they just be vegan?!

So safe to say, I was so happy when I found It Doesn’t Taste Like Chicken’s Homemade Mac and Cheese Powder recipe! It was so simple, and for once didn’t involve multiple bowls, pots, and messy ingredients. And best of all, no blender! I only ever dreamed of the day that mac and cheese could be vegan, and easy! Usually vegan mac and cheese recipes involve steaming and blending veggies, or worse, soaking cashews.

In fact, I loved it so much I was willing to experiment with my own version! It wasn’t hard to tell what spices I liked and didn’t like once I tasted the original recipe!

All you need to make this powdered mac and cheese is a large mason jar and some measuring spoons – if you’re not comfortable eye-balling the spices! The powdered mix can be stored in a mason jar in the pantry until you want to use it! I think this is my favorite part about it! You don’t have to prep something time consuming before getting to the mac and cheese! You can do it beforehand – and save yourself the 5 minutes. 5 minutes is actually nothing so I wouldn’t mind making it at any point, it’s a low commitment!

I mixed all the spices in an old Costco sized Bonne Maman jam jar. Partially because it was the biggest jar we had, but also because the jar is cute af with its red checkered lid! Literally all you do is put all the spices in and shake it. 10/10 my favorite recipe already. Seriously, I think you’ll be shocked that something so simple can turn into something so damn classy.

I think the hardest part about making mac and cheese from scratch is getting the right pasta to cheese ratio. Pasta is a confusing thing, I find I always end up making way too much! I would rather have too much pasta than not enough. Especially when mac and cheese is involved.

Preparing the Mac and Cheese

So I cooked 2 dry cups of macaroni noodles to go with ½ cup of powder. I prefer the pasta to be a bit firm, so I boiled it for 5 minutes. I find the noodles cook a bit more when you mix them with the sauce, so make sure you undercook them a bit if you don’t want them to get soggy!

Once the pasta was cooked, I transferred it into a large bowl so I could use the warm pot to make the sauce. All you do to make the cheese sauce is mix ½ cup of cheese powder with 1 ½ cups of almond milk. Whisk this combo over medium heat for a few minutes and it should start to bubble and thicken. Make sure you whisk it constantly so it doesn’t stick to the pot and burn. Then combine sauce and macaroni.

I honestly didn’t expect just a few simple spices and flour to turn into such a decadent, flavourful meal! It tastes like it took a lot of time, effort and skill, but really, it was one of the easiest recipes I’ve ever made.

The only thing I didn’t really care for in the cheese powder recipe from the original recipe was the lemon pepper. I found it gave the mac and cheese a cool, minty or fresh aftertaste. It was classy, and added a depth to the flavour, but I prefer it with just classic black pepper. I’m honestly questioning if lemon pepper was only in the recipe so she could plug her affiliate link. That being said, I don’t think it’s as important of an ingredient as she makes it sound in her blog post about it.

A great thing about this recipe is you can tweak the spices and ratios exactly to your taste! I personally prefer a less pungent mac and cheese sauce so I cut down on the nooch! I also love more garlic and oniony flavours so I increased those in this recipe! Now that I have the base recipe tweaked to my taste, I might try adding in buffalo seasoning for a buffalo mac and cheese!

Preparing this mac and cheese is just as easy as the powder itself was to prepare. All you do is add 1 ½ cups of almond milk and ½ cup of the cheese powder to a pot and whisk together. It gets magically thick so quickly! I guess the flour is supposed to thicken the sauce but I had no idea it would get THIS thick! Seriously, you have to try it just to see this magic happen for yourself.

Also, the sauce combines with the noodles SO well! I don’t know if this makes sense to anyone else, but I find some cheese sauce will reject the noodles and just not stick well! Sometimes this happens to me with Daiya, it will be on the noodles but not! It’s like you can just wipe away the cheese sauce and the noodles are naked again.

This recipe sticks so well to the noodles, they become one! It’s like the noodle itself becomes cheese flavour, baked right in! This is awesome because it makes the sauce nice and dry, instead of soupy! This texture is less messy than most cheese sauces, so I think it’s the perfect mac and cheese to put on or in things. Like mac and cheese poutine, burgers, or pizza! Yum!

This is my favorite mac and cheese recipe ever! I know that’s a massive claim, but I’m honestly obsessed! And since I’m so picky, when I find something I like THIS much, I have to stick to it! Eian still prefers Decadent Vegan’s mac and cheese recipe, since it’s more cheesy and pungent. But if you’re like me, and don’t like over the top cheese flavours, this recipe is for you! It’s super flavourful but not overpowering so it would go well with so many other foods! 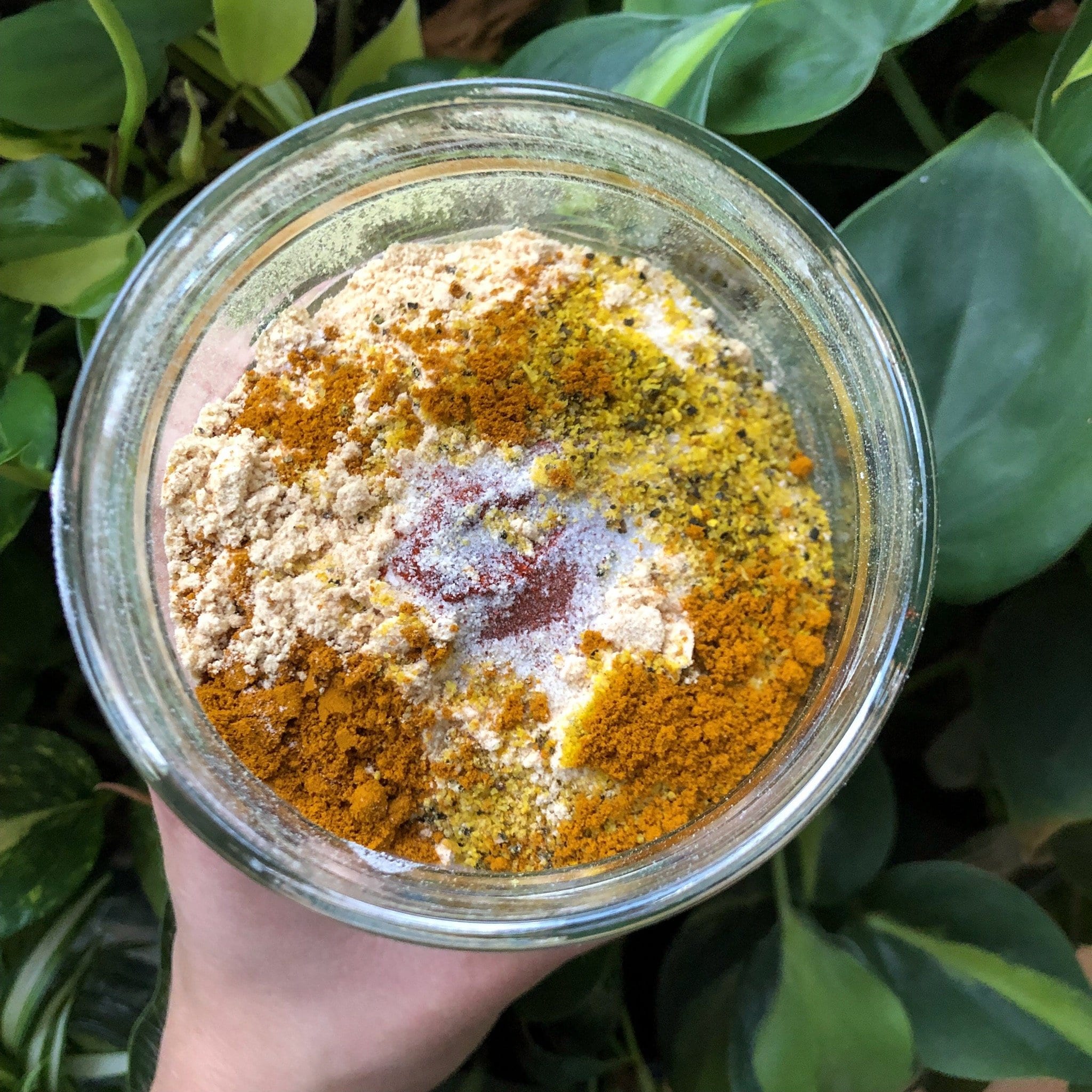 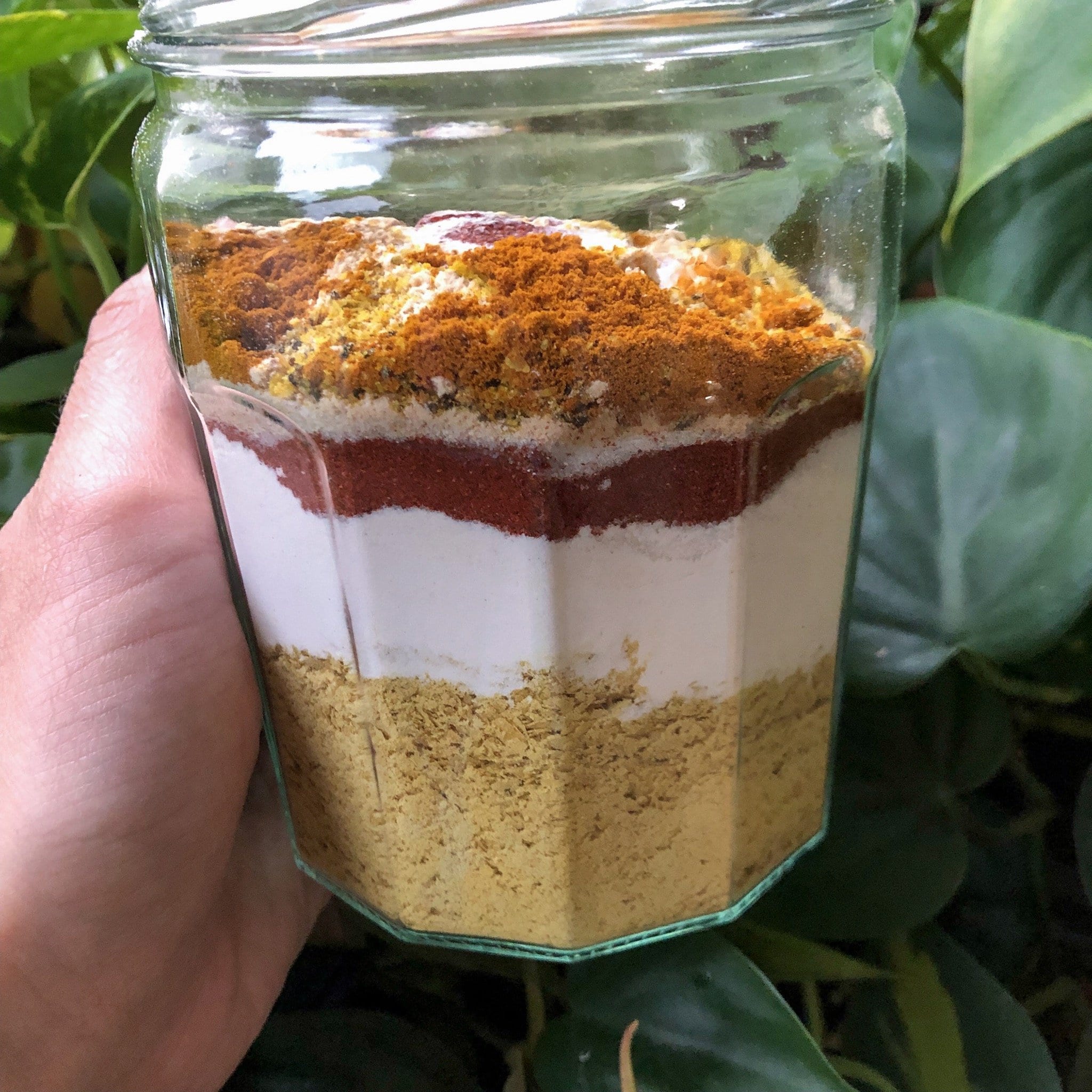 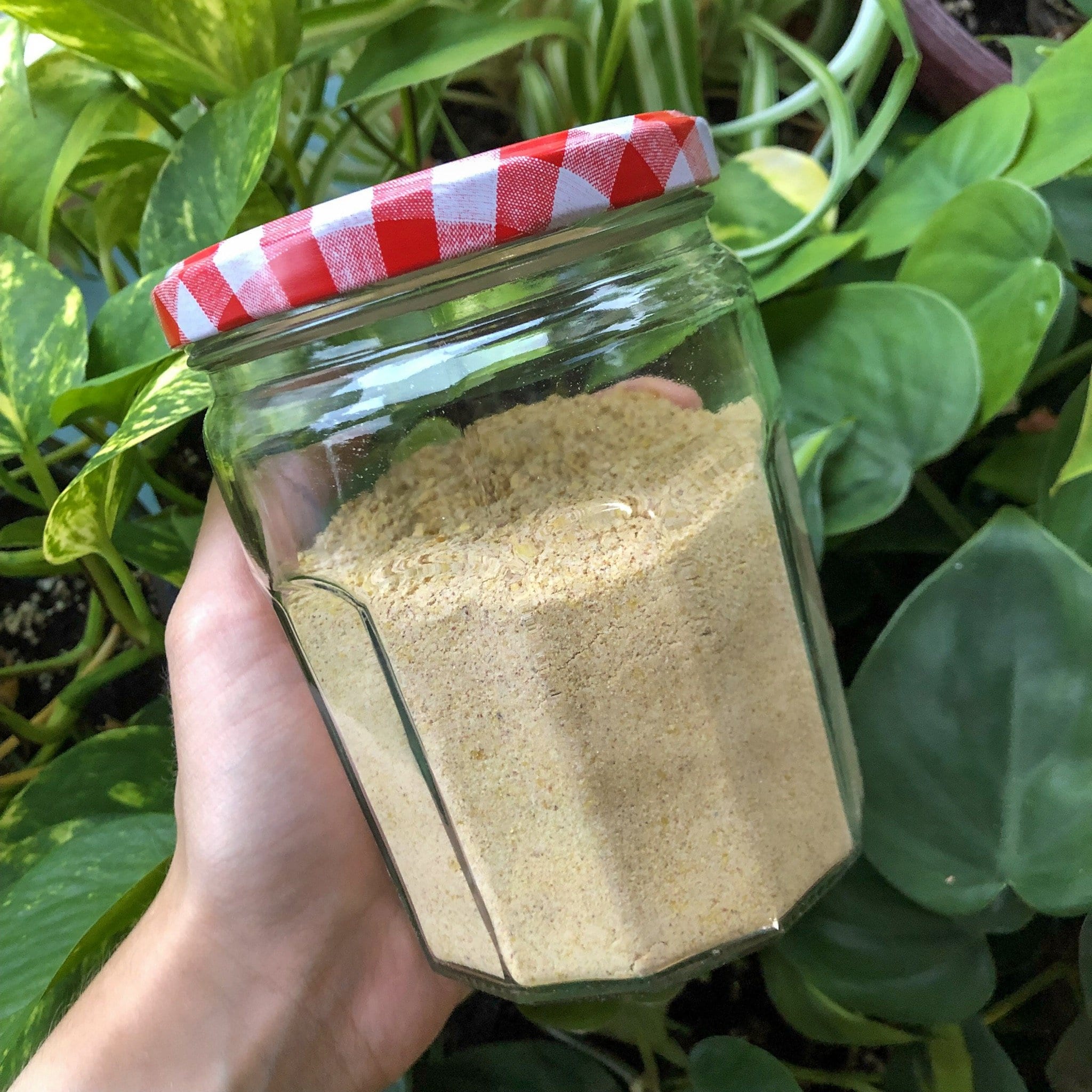 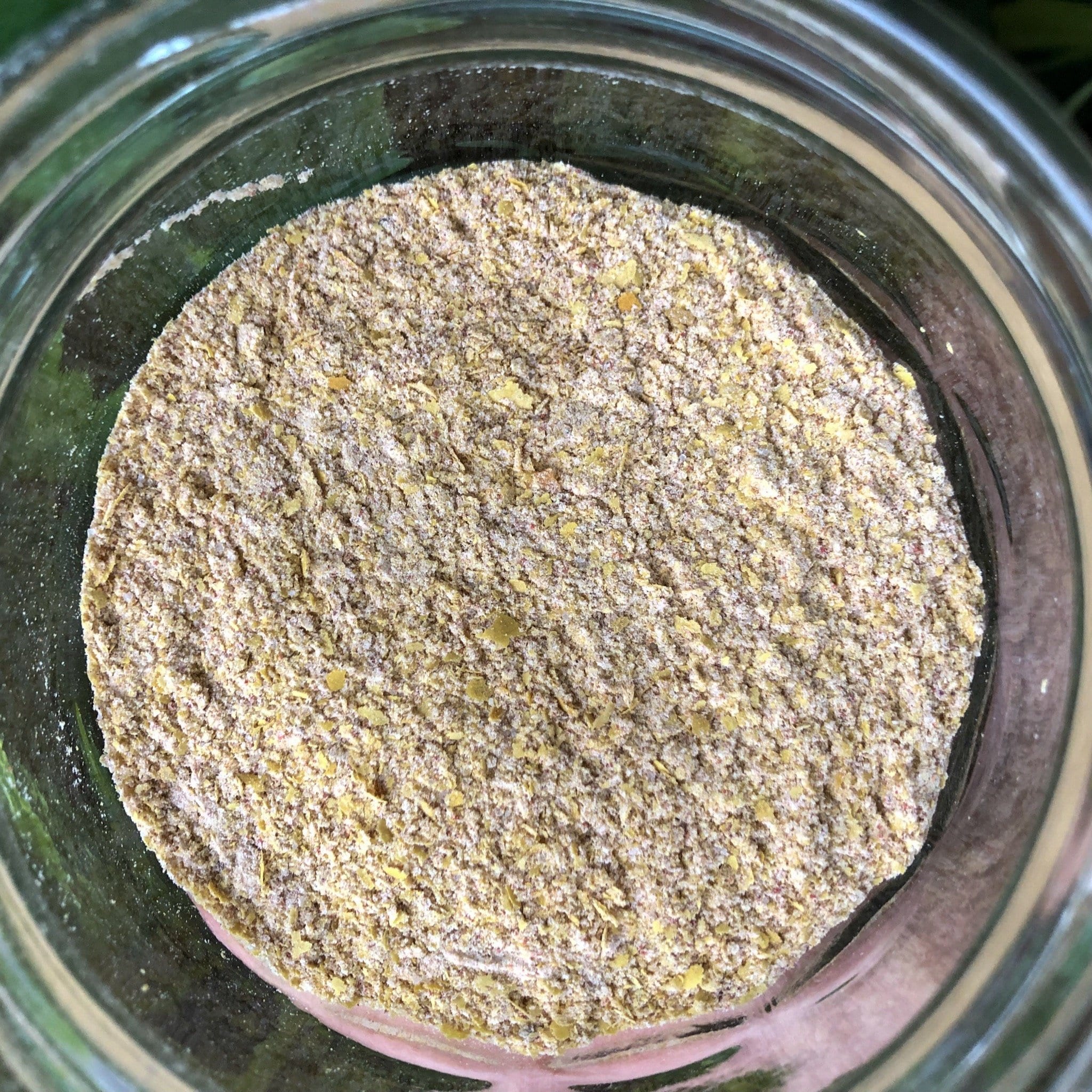 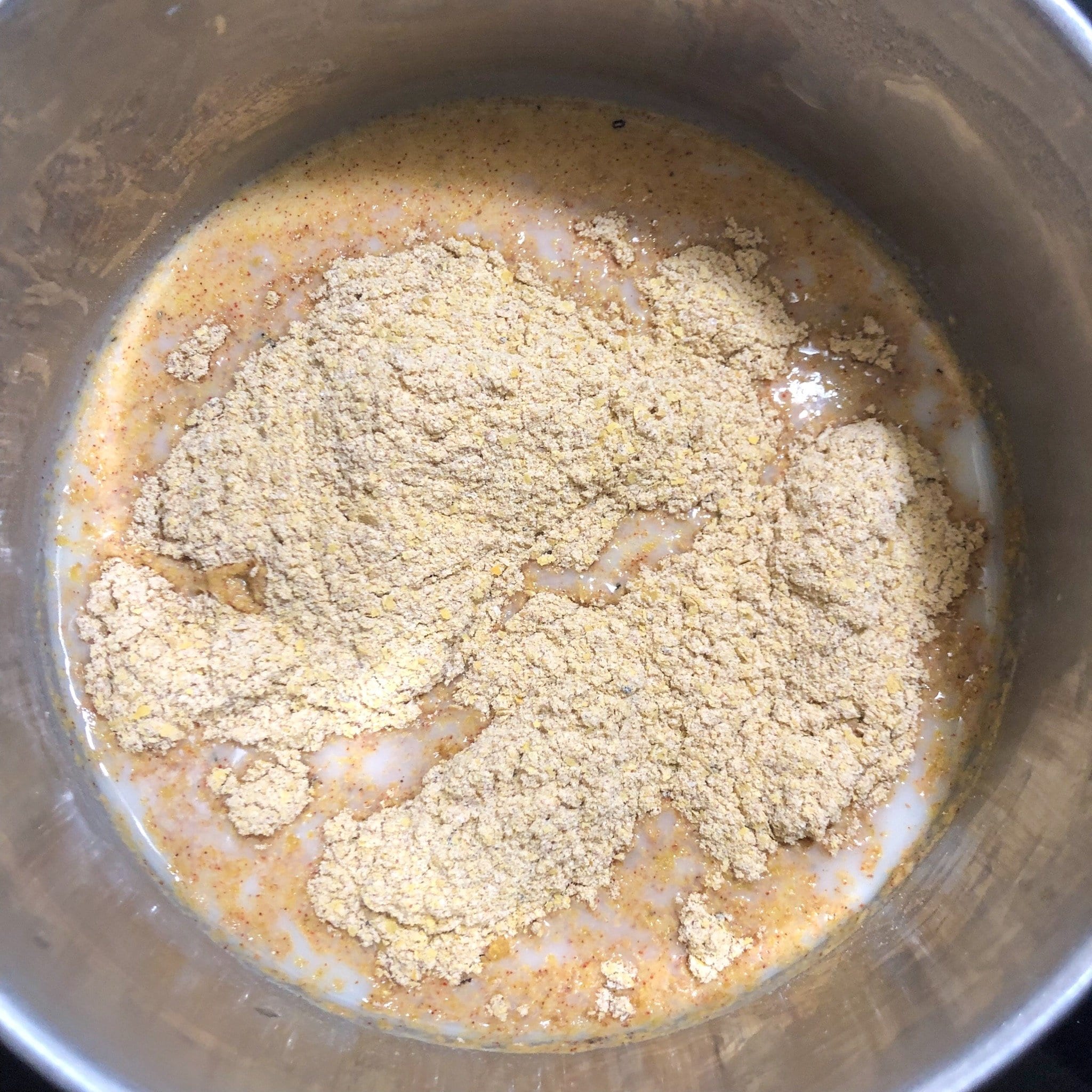 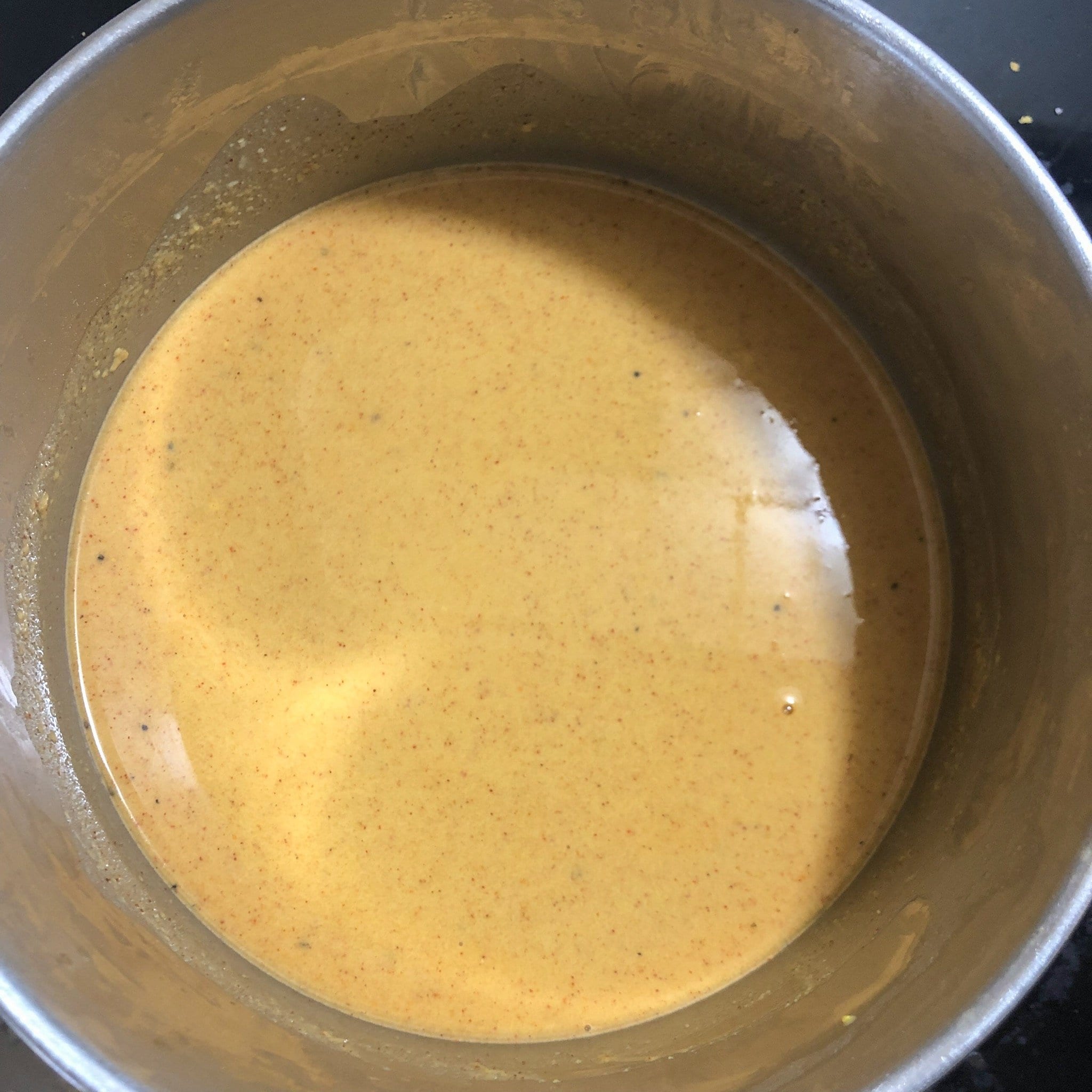 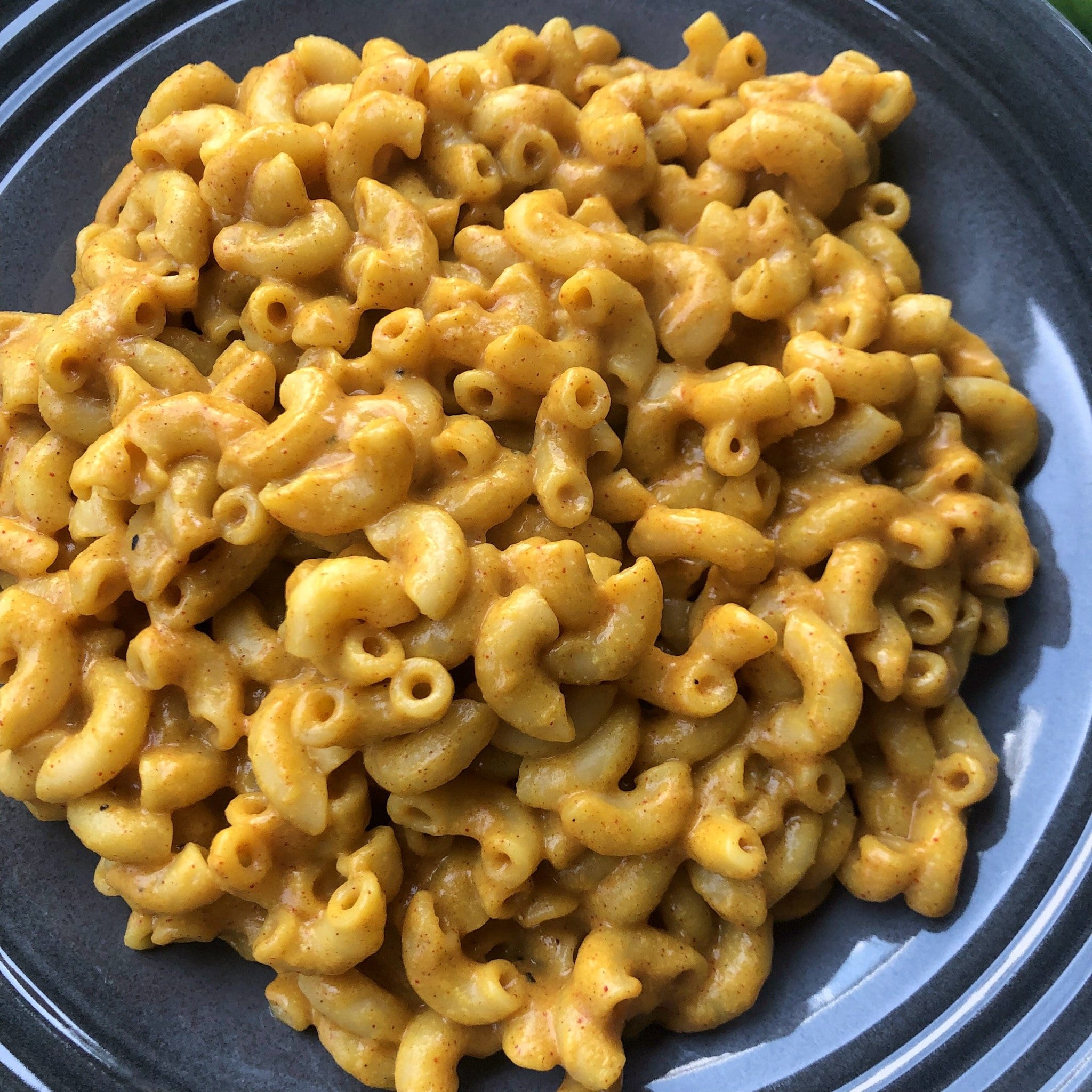 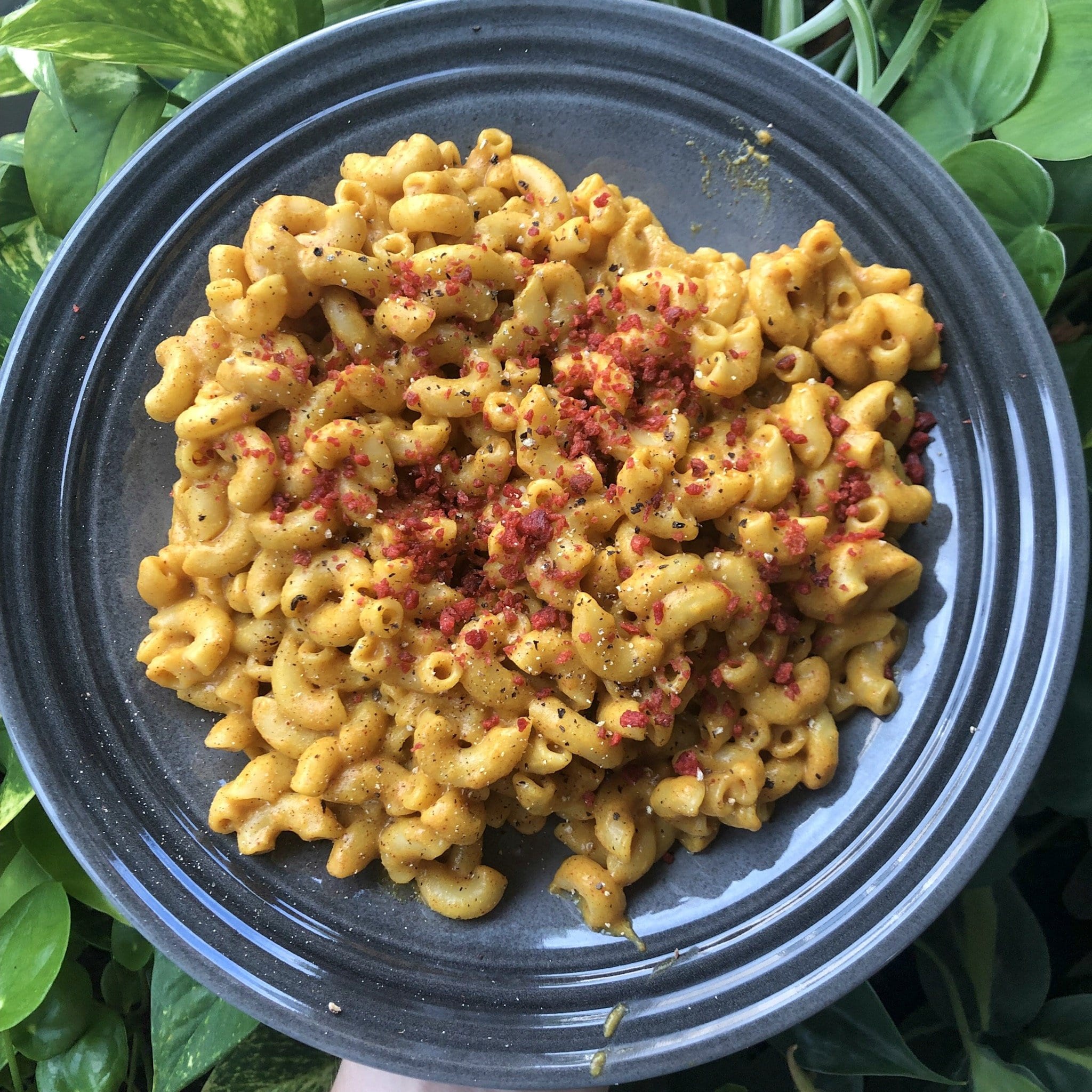 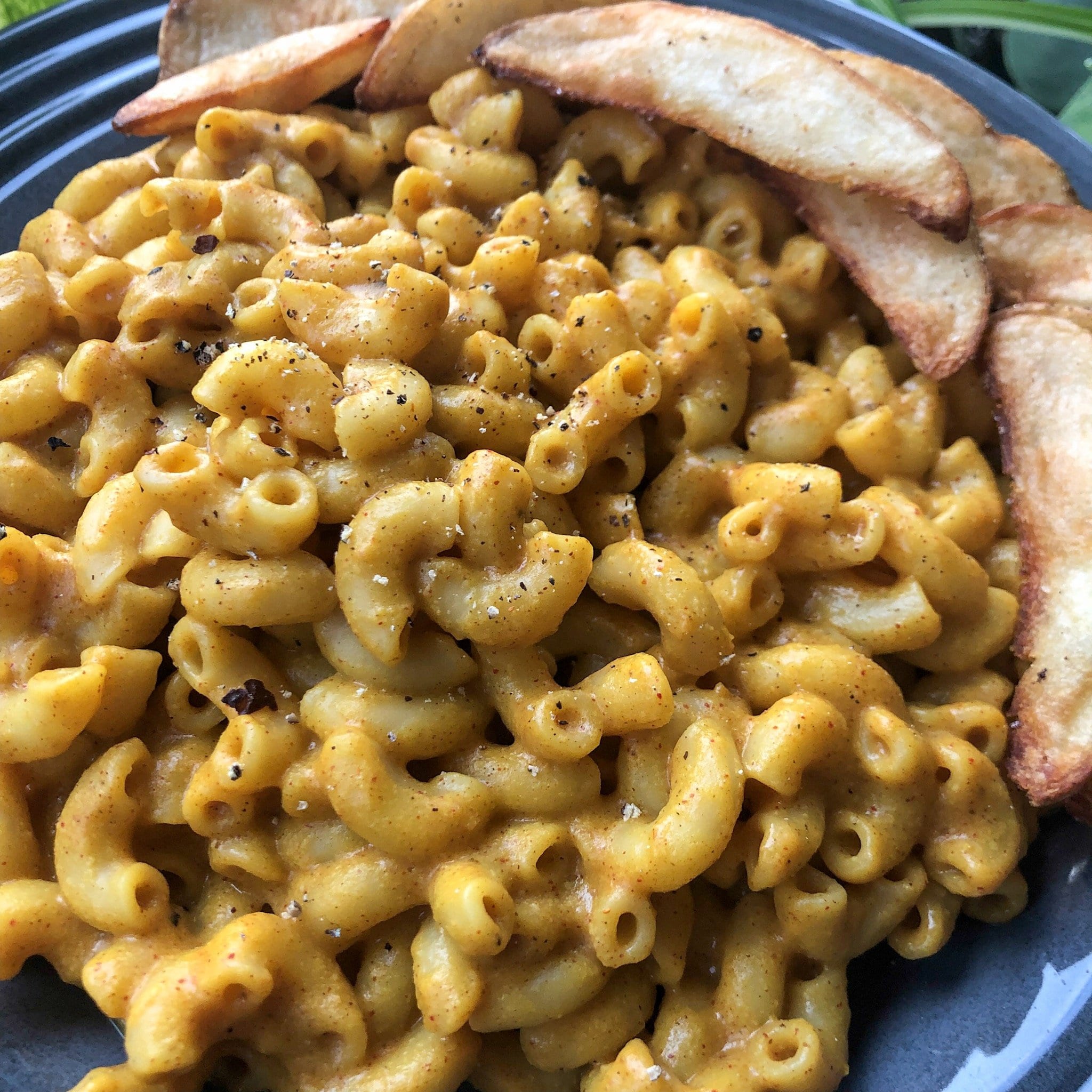 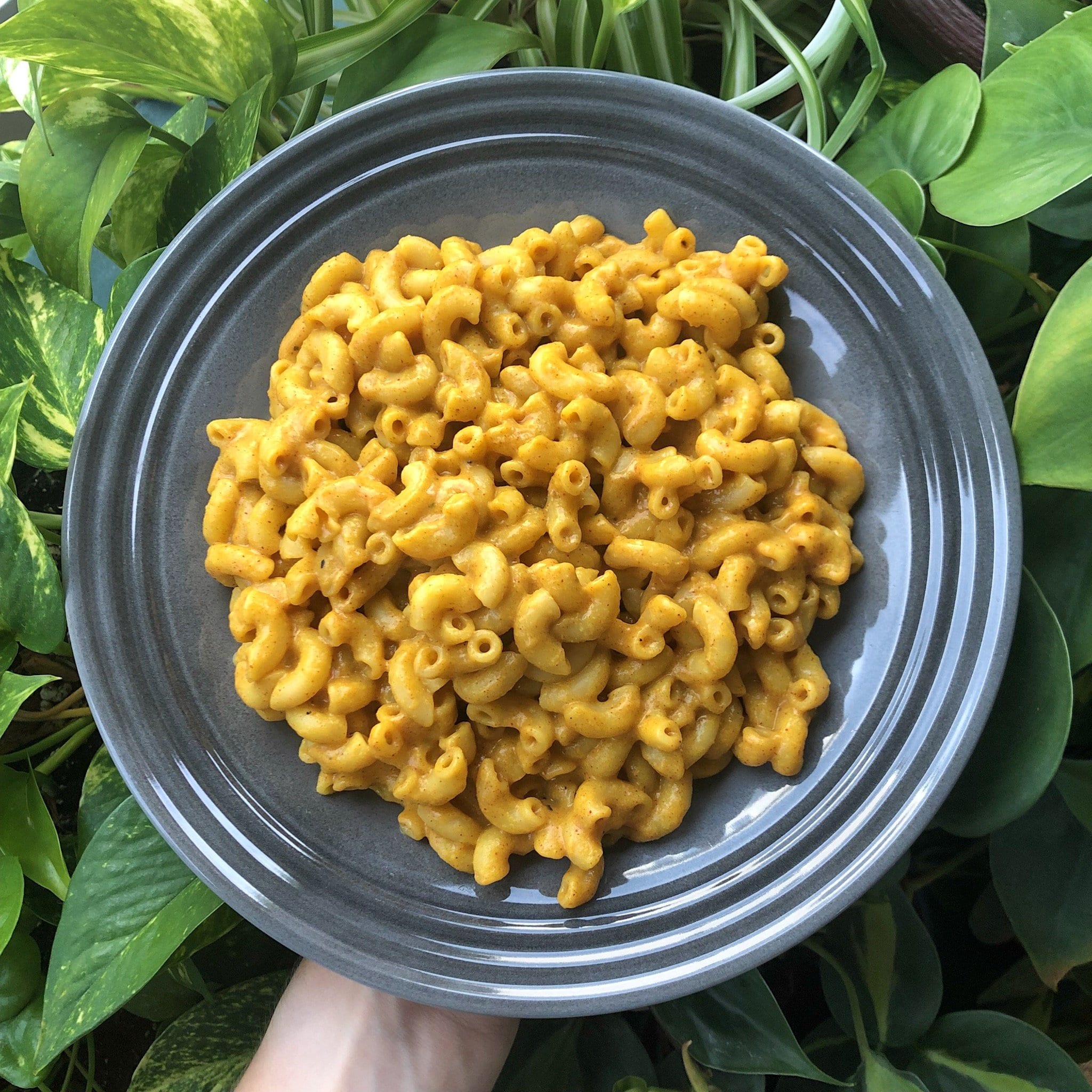 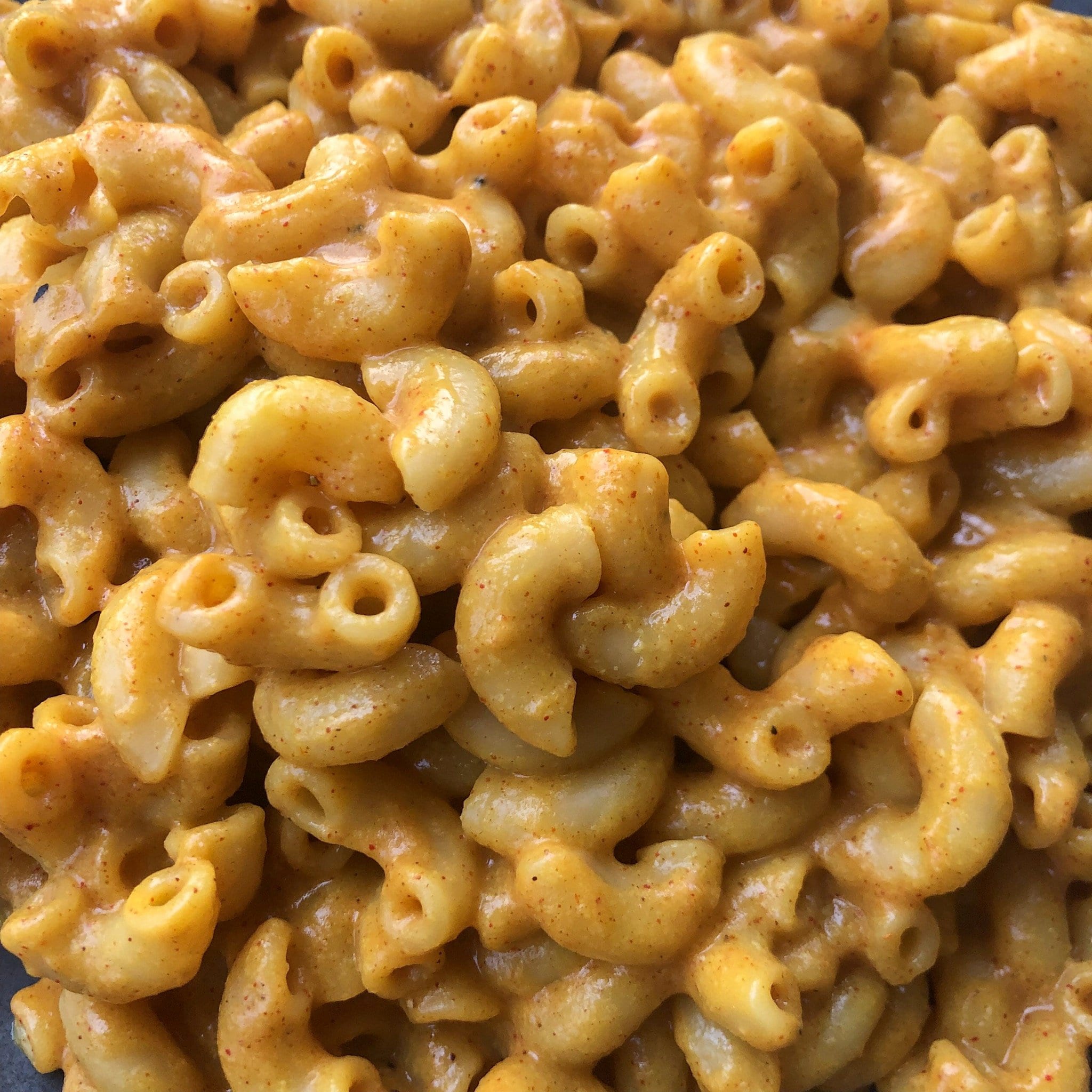 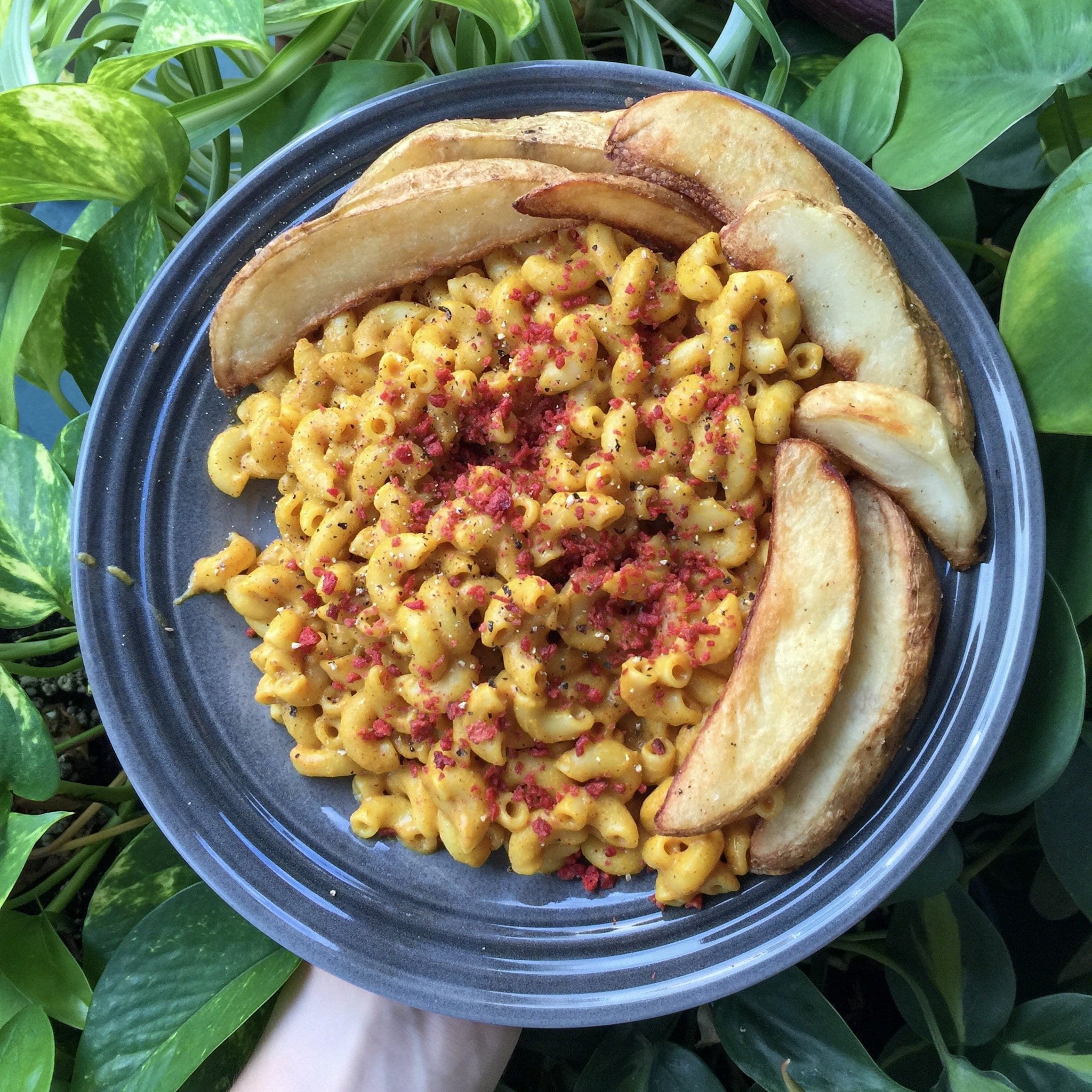 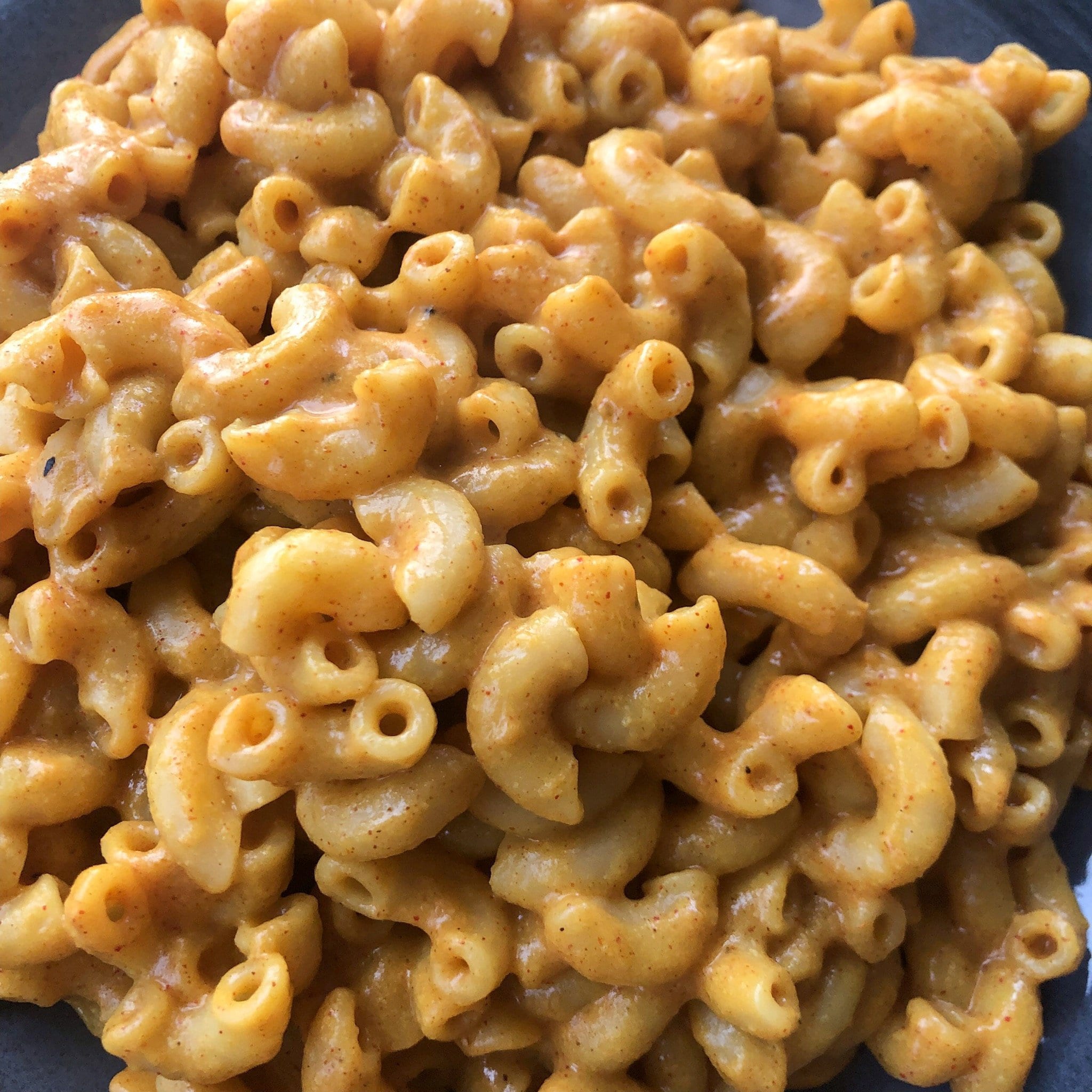 Hi I’m Alex, and I’m a potato addict. I’m one half of Chickpea Express, a vegan couple on the East Coast of Canada. We create vegan comfort food and junk food recipes with a healthy, plant-based twist. Oh, and did I mention we love bread and potatoes?
See more from author » 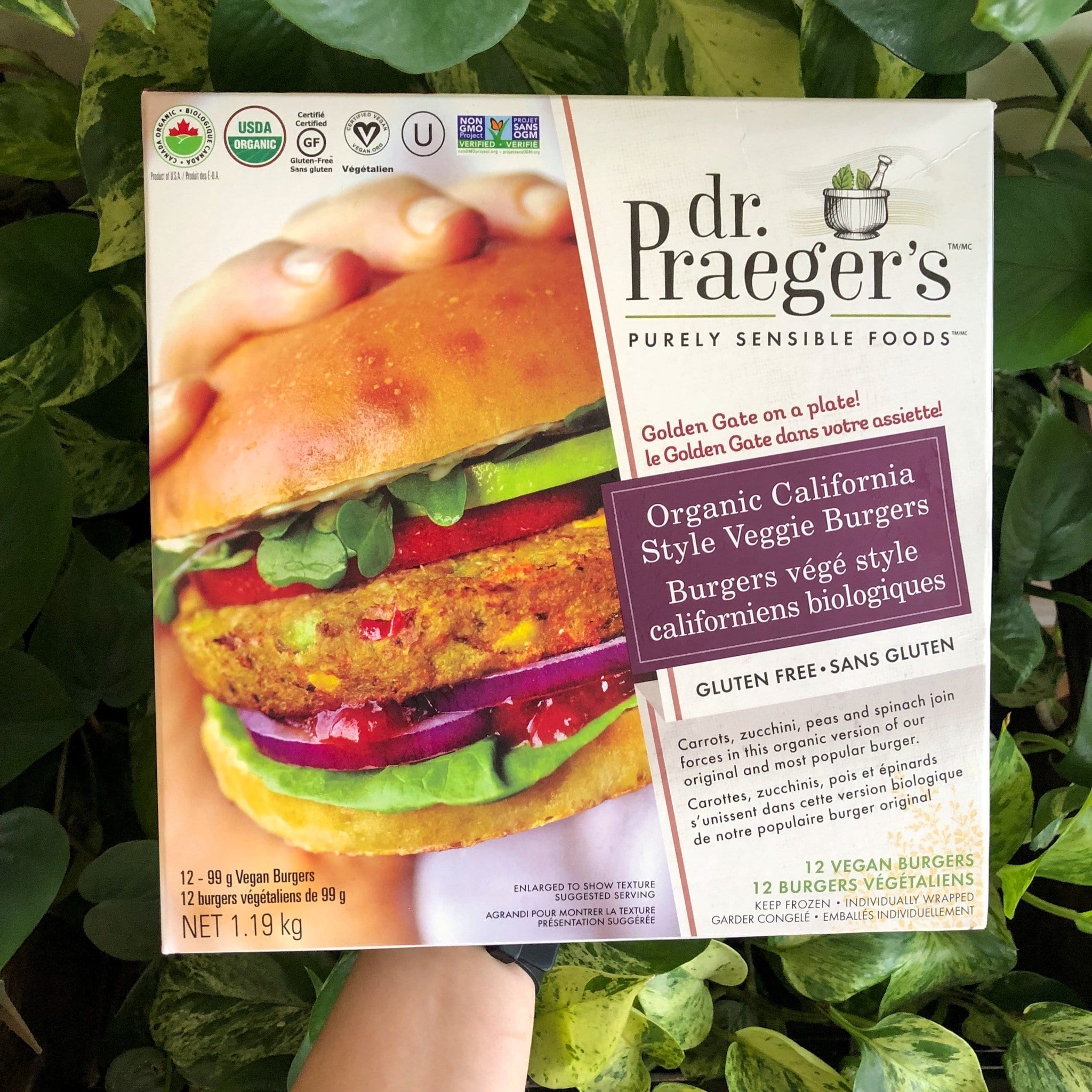 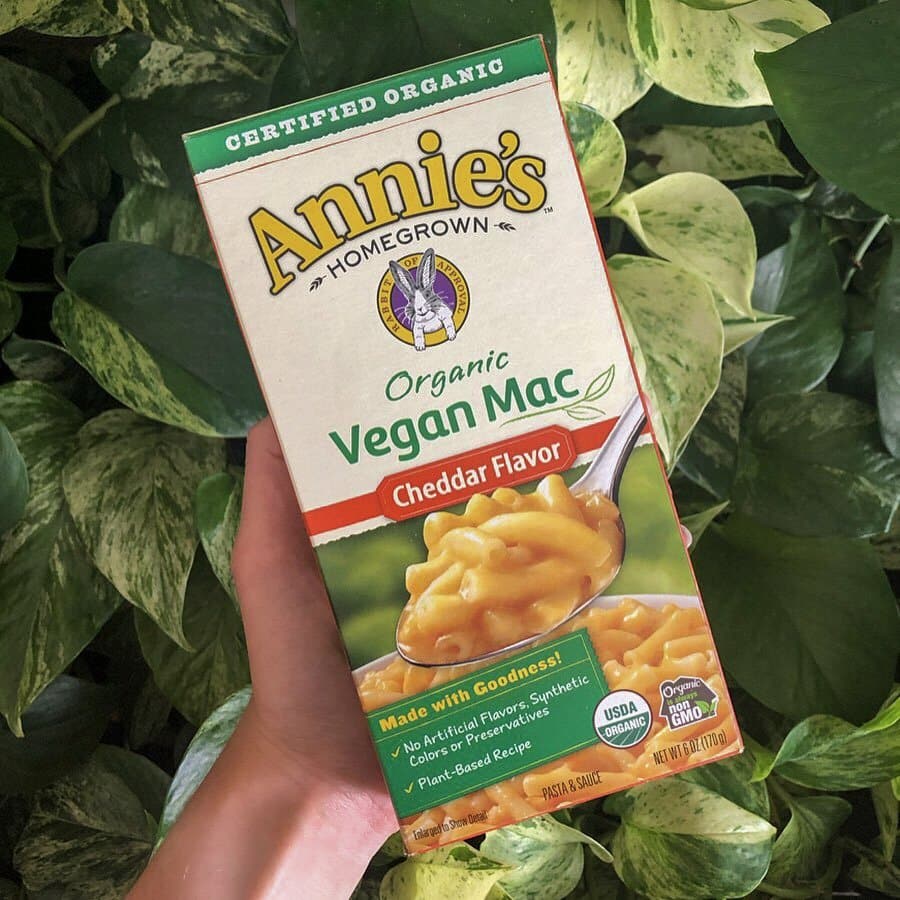 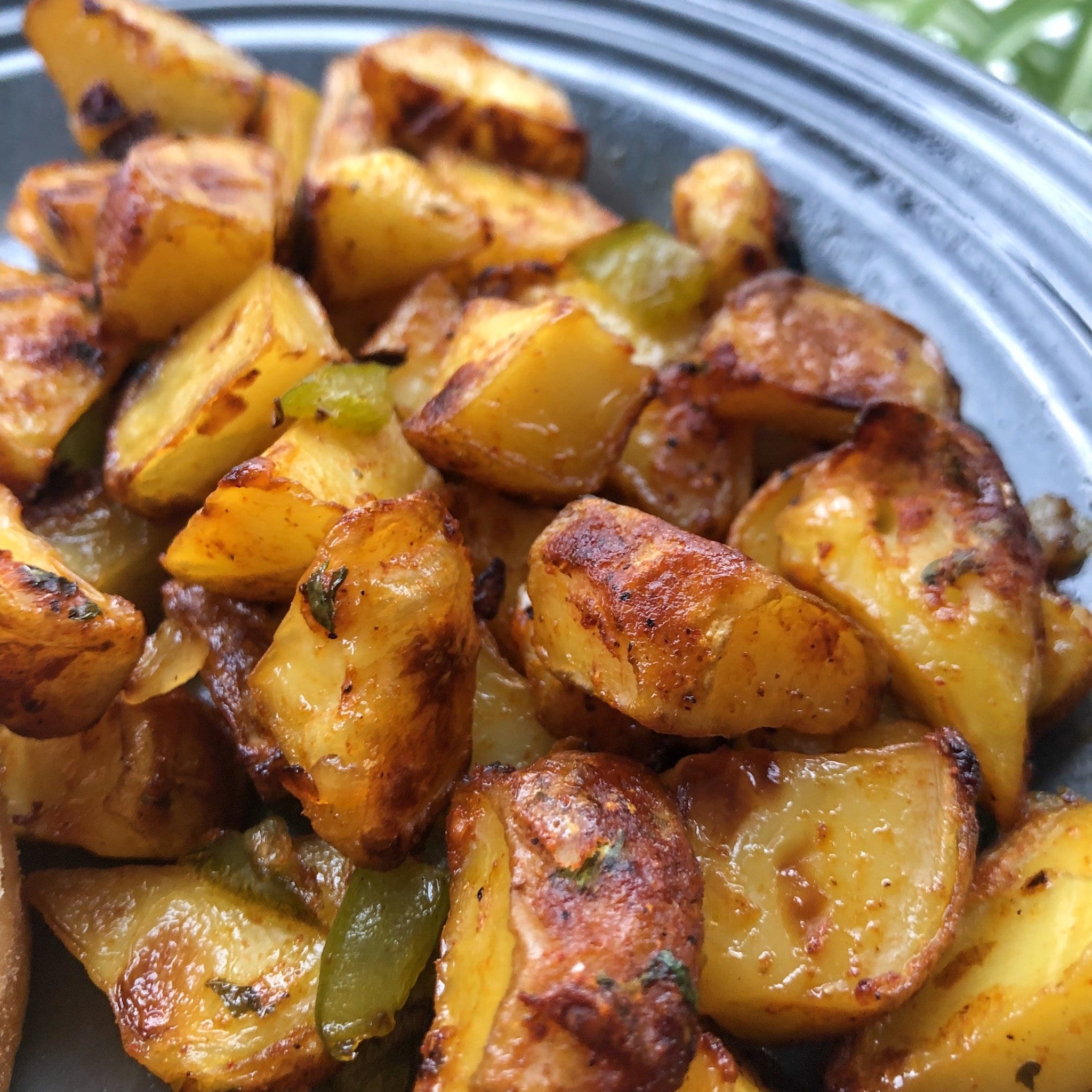 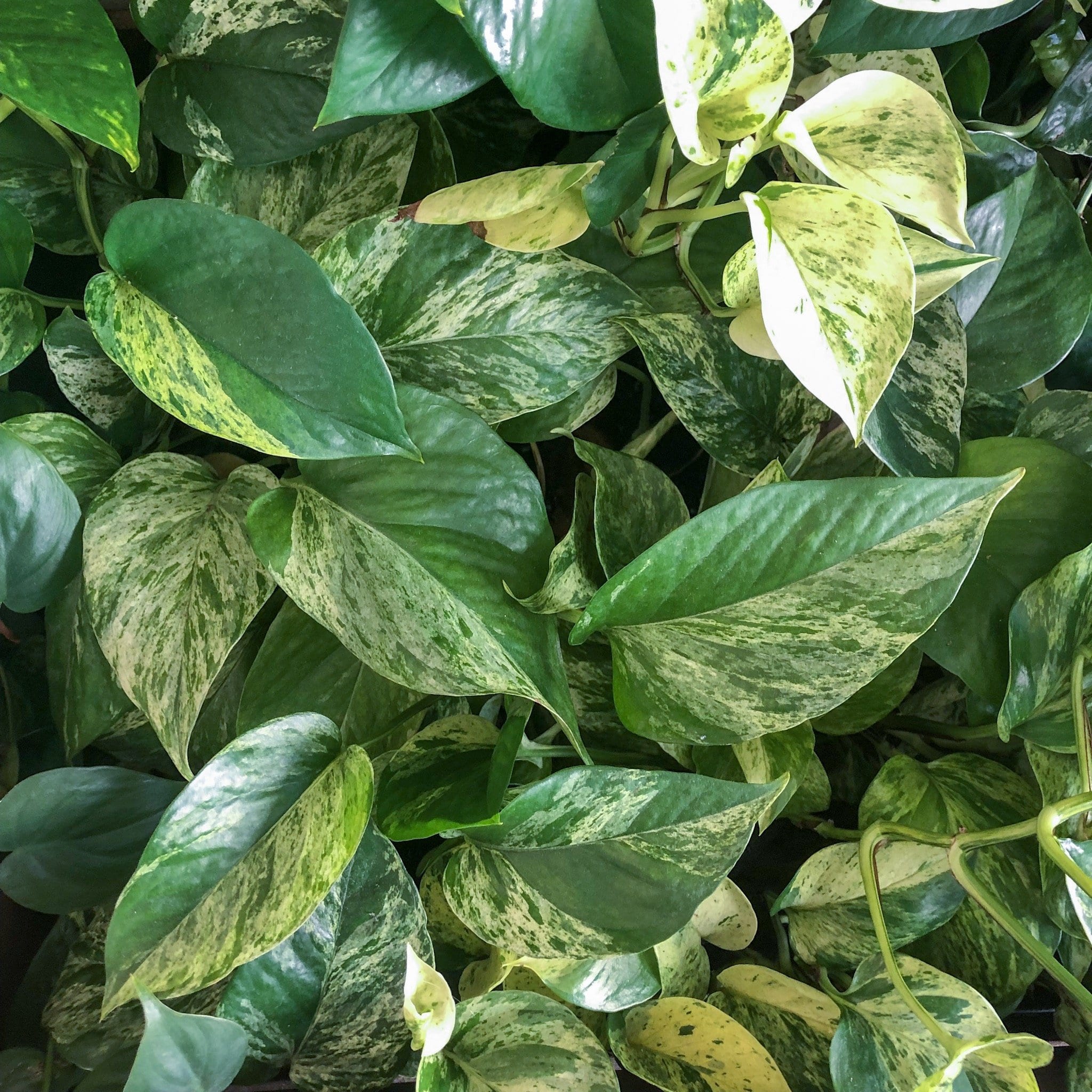 Sign up for our newsletter and be the first to know when we release our delicious creations to the world!